The Francigena was not really a street but rather a bundle of routes, a road system with many alternatives. These variants are in unity and official travelogue of Sigerico, bishop of Canterbury in 990 runs through from Rome to Canterbury.

The section from Canterbury to Rome is spread over a distance of 1,600 km running from Canterbury, and comes to Dover to cross the English Channel, from Calais, via Reims, Besançon and Lausanne comes to the Alps that are passed to the Great St. Bernardo. Dalla Valle d'Aosta is down to Ivrea, then Vercelli, Pavia, crossing the Apennines between the provinces of Piacenza and Parma Segalari through, and then Berceto Fornovo of Taro. Continue from Pontremoli to Lucca, Porcari, Alton, Galleno, Ponte a Cappiano Fucecchio, San Gimignano, Colle di Val d'Elsa, Siena, Viterbo and ends in Rome. 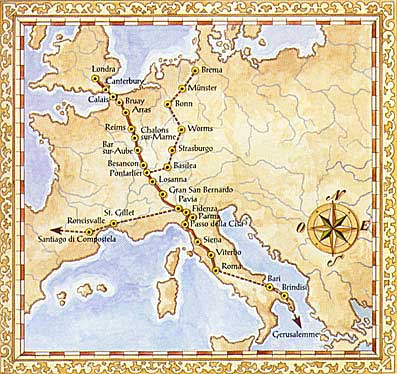 Sigerico in 990, bishop of Canterbury, took 79 days to go, mostly on foot, all of the 1,600 km journey. The average distance of travel was then about 20 km per day.

The route began to assert itself when the Lombard king Rotari, following the conquest of the Ligurian coast and the fort named Marictima Cisa, will establish a main street of communication, which became known as the "Via Francigena Bardone upstream." The artery becomes the axis of the successive military logistical communications for the south of the Italian peninsula

For more information on the way francigena you can see:
European Association of streets Francigene
The Francigena
Via Francigena